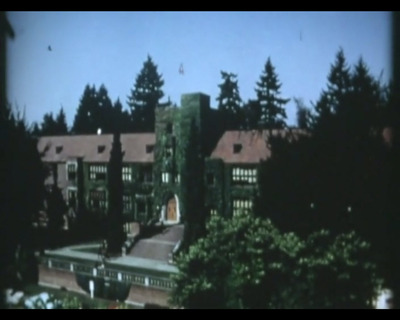 "Marc Blau gave the film along with a DVD of the film, to Janet S. Frostad, Donor Relations Assistant. Janet sent the film and the DVD to me in early November 2012.1 viewed the DVD on 10 Nov 2012.

The film is in color. It appears to be professionally made. The DVD that I watched had no soimd, but the film looks like a film that would have sound. The film was clearly made in 1967, as it shows Thompson Hall under construction, and shows several students who graduated with the class of 1967.

The film shows many of the buildings on campus. It also shows classes in session. Faculty members I recognized include: John Magee, Harold Simonson, Lyle Shelmidine, Leroy Ostransky, Bruce Rodgers, Ed Goman, and Del Gibbs. I also recognized vice president Richard Dale Smith. Students I recognized include Diane Garland and Gary Birchler, both members of the class of 1967.

The film includes an aerial view of campus, the UPS marching band, a football game, a pep rally with great old vehicles, students inside Collins Memorial Library, swimmers in the swimming pool, and the campus cornerstone at its location of many decades south of Jones Hall (the cornerstone is currently located outside the northeast comer of Kilworth Chapel).

This is a great acquisition."